I've had a busy summer, so since the initial release of Swift, I haven't had very much time to keep up with the updates the language has undergone over time. Since the 1.0 release is now finalized and I also finally have some additional time, I figured I'd spend it adjusting something I had made in beta 1 to see how much has changed.

A project that I made when Swift first came out is CWSortTester - a simple app that tested and graphed sorting speeds of Swift compared to Objective-C. The tests only include bubble sort, quick sort, and the native sort. I initially intended to add some more sorts, but never really got around to it. Regardless, hopefully it will still be a good display of the changes Swift has gone through since the initial release. 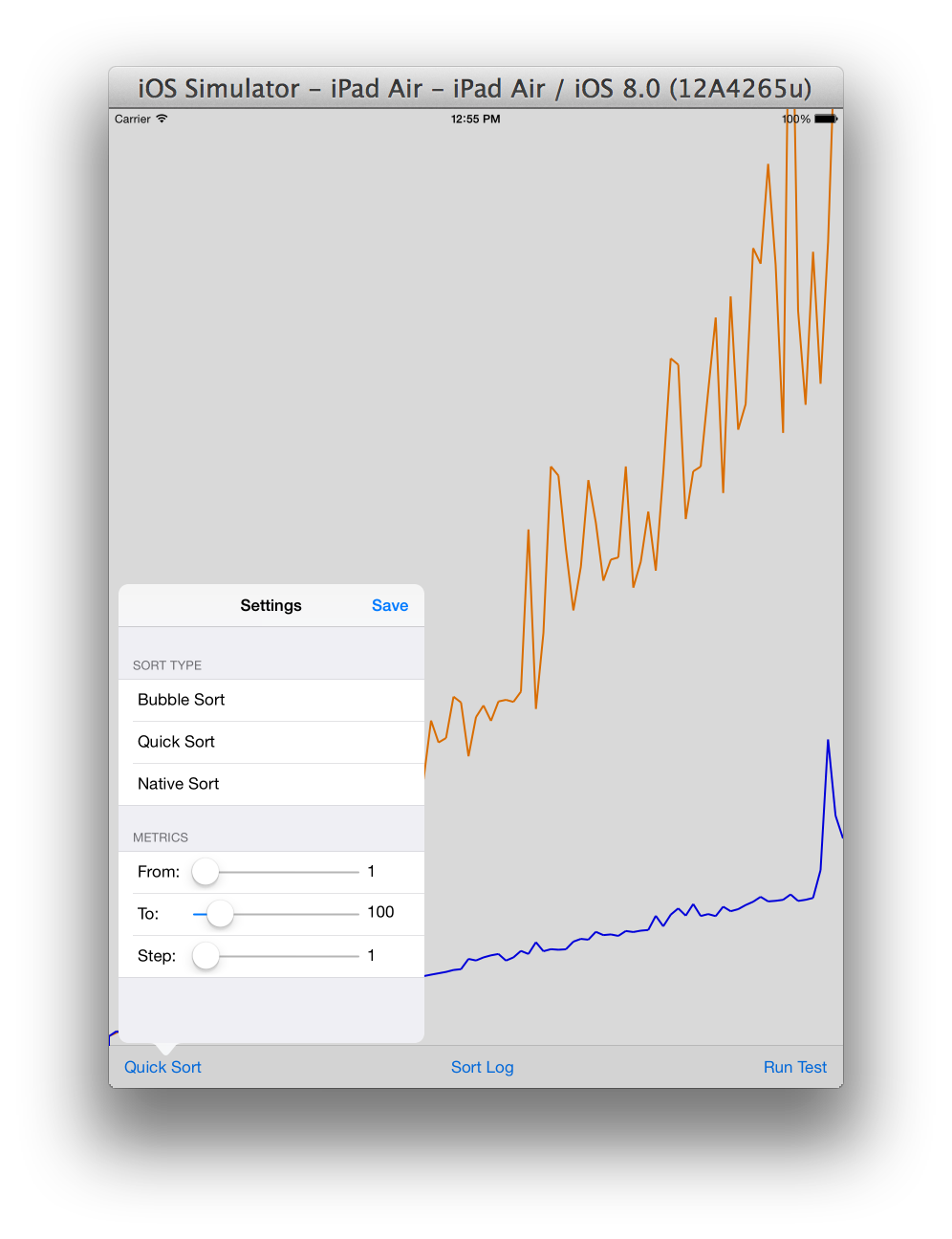 After first reopening the project in Xcode, as expected, I saw a bunch of errors on the screen.

The first issue I decided to address is the new Array syntax. As Xcode tells me, Array types are now written with the brackets around the element type. This means changing this:

It was pretty easy to find and fix the other instances of this change.

This change was introduced in Xcode 6 beta 3. Normal array declarations are not changed (e.g. Array<Int>), but shorthand changed from the more C-like Int[] to the arguably clearer [Int].

Another bit of array fun is regarding the += operator. I had the following line of code originally:

Due to possible ambiguity with working with Any or AnyObject types, the += operator was changed to only concatenate arrays. To append an element, the two options now are using the .append function or putting the right hand side in an array:

Though this syntax works, I think that I'm going to stick with .append because it is more clear.

To solve the issue, I had to add the following code to all of my UIViewController subclasses:

In one case, I had already implemented the initializer, but I didn't have the required keyword there, so I only needed to add that.

I also had to remove the implicit unwrapping operator, !, from NSCoder in the code from the previous section. This value can no longer be nil, so its "optionality" was removed. This, apparently, was a common new issue that I found in other parts of my code as well.

The other optional issue that I still had was regarding @IBOutlet properties. Previously, the following was valid:

The @IBOutlet modifier would let the compiler know that this is basically a weak reference without needing to specify it as such. However, now, Xcode was angry at me and said "'IBOutlet' property has non-optional type 'UIBarButtonItem'." It looks like outlets properties were made optional in beta 4, and that makes plenty of sense, since the outlets can possibly be nil.

Some other properties were changed to be optionals as well. For instance, the well-known self.navigationController is now understandably optional. Also, the following:

All of the optionals were removed in this case.

From the Official Swift Blog:

The half-open range operator has been changed from .. to ..< to make it more clear alongside the ... operator for closed ranges.

Personally, I kind of liked the simplicity of .. and .... The ..< makes more sense, especially for quick reading of code, but it's sort of a weird looking operator. Anyhow, this issue was pretty easy to fix.

This is a weird-looking error. Fortunately, a little bit of searching helped me figure out what the issue was. Originally, "immutable" arrays in Swift worked very strangely, because the members of the "immutable" array were still mutable. In the beta 3 update, Apple completely revised the semantics of arrays so that immutable arrays were fully immutable. This means that in order to modify the array that is passed in, we now have to specify that we can modify it using the inout keyword:

This is because arrays are implemented as structs in Swift, and structs are passed by value, not by reference as classes are. An interesting side effect (and obvious callback to C) of this is that when the arrays are passed into the function, we have to use an explicit '&':

Adding the inout modifier, however, added some new errors to my code:

Next, I tried getting rid of the $0 shorthand and being more explicit:

As a result, I got a shiny new error message: '[Int]' is not convertible to '@lvalue inout $T5'. What I was missing was the var keyword. Parameters are immutable by default (as if declared by let), so in order to be able to pass the variable in by reference in order to modify it, it has to be modifiable to begin with. So what I needed was:

Now that I am at a point at which my app once again compiles, I can take a look at access control. Surprisingly enough, when Swift first launched, it had no access control whatsoever. Fortunately, in beta 4, 3 access control keywords were added: public, private, and internal.

The public and private keywords are well-known and understood, but the internal keyword is new. This seems to be Apple's take on the usual protected concept. A property that is internal is available only to the module that includes its definition. This is the default access level for all variables.

After looking at my code, I didn't see any particular need to change any variable to something other than the default internal, but access control will definitely be useful for other things in the future, and I'm glad that it is finally there.

In beta 1, both "Quick Sort" and "Native Sort" performed the same exact way, that is, Objective-C was always significantly faster. That still remains the case here for "Quick Sort," but when using "Native Sort," Swift actually edges Objective-C out most of the time. This is consistent with Jesse Squires' recent popular writeup.

There seem to still be some auto-layout issues that weren't there back in beta 1 days, but I mainly wanted to focus on the Swift for now. You can find a diff on the full changes here on my GitHub page.

The Official Swift Blog is a good source of documentation of past and future changes - I doubt that I ran into all of them here, but I think that I at least hit most of the big ones. I can't wait to see what changes Swift will undergo in the future.